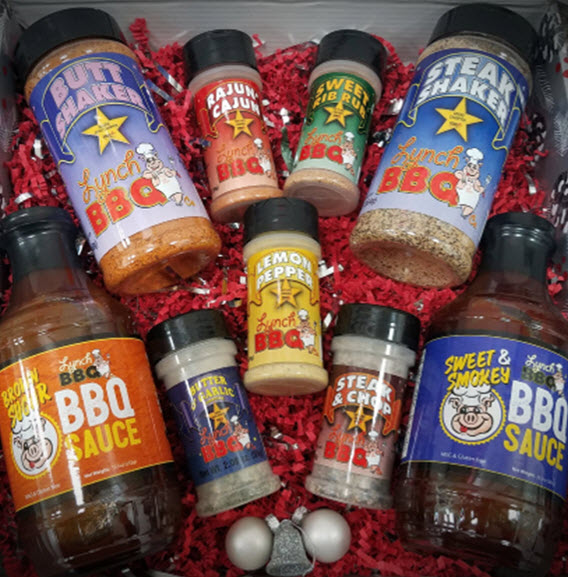 After years of catering and experimenting with several flavors, Gary Lynch, owner, and president of Lynch Livestock, Inc., decided it was time to create our own seasoning blends. The goals were to find flavors that enhanced the meat and to marinate more efficiently. Lynch's Steak Seasoning and Lynch's Sweet Rib Rub were developed and were used to enhance pork tenderloins, ribs, and prime rib.

As the customer base grew, so did the demand for the various cuts of meat. Lynch's Butt Shaker and Steak & Chop were developed to meet that demand. The diversity of flavors in these seasoning helped expand the variety of meats that were cooked. Menus for catering now included beef brisket, pork loin, buttered mushrooms, and assorted vegetables.

When thinking of BBQ you can not go without some sauce on the side, Lynch's Sweet n' Smokey and Lynch's Spicy Sweet N' Smokey were added to the mix to satisfy that. These sauces allowed the development of Lynch's signature style BBQ Baked Beans, which are served at over 86% of all our catering jobs. These sauces also allowed the development of Lynch's BBQ Pulled Pork, offering a unique rich flavor to this meat.

In early 2001 it was decided to expand the product line to include Lemon Pepper. Fish and chicken were becoming popular requests and the rich citrus flavor accented these meats wonderfully. In 2002, with spicy food becoming wildly popular, Lynch's Rajun Cajun was brought into the mix. A sweet and fiery blend of spices.

Over the years Lynch's BBQ Sauces and Seasonings have won multiple Taste of Excellence Awards from the National BBQ Association.

Lynch BBQ can offer a wide variety of catering and dining services for its guests. From appetizer events, weddings, backyard barbecues, or open houses; we offer the services, the equipment, and the experience needed to help create a great event! In addition to catering, we offer a wide variety of retail smoked meats, locker cut style meats, and seasonings, and sauces. Lynch BBQ Company is a reputable company that will offer meal solutions for you, whatever your event may be. Lynch BBQ - Your choice when delicious matters.

We love Customer feedback so please toss us the number of stars you think we deserve and a short note if you like. If you are unhappy please include your phone number. Thank you very much.
140 characters left.